5 myths about canned food - what is true and what is not? 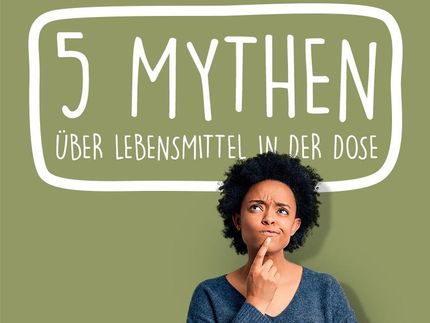 In cooperation with the opinion research institute YouGov, the initiative weissblech-kommt-weiter.de asked more than 2,000 people in Germany what they think about food in tin cans. Five myths emerged from the survey.

In fact, this myth can be debunked based on numerous studies. A 2015 study by the Food Can Initiative together with the SGS Institut Fresenius showed, for example, that fresh tomatoes contain less vitamin C than tomatoes from food cans. By comparison, canned tomatoes contain 32 percent of the daily dose recommended by the German Nutrition Society (Deutsche Gesellschaft für Ernährung e.V.) according to the DACH reference values for a 200-gram serving. Fresh tomatoes contain only 23 percent. Tinned tomatoes are also ahead in terms of beta-carotene. Here, canned tomatoes have 66 percent and fresh tomatoes only 57 percent of the daily dose recommended by the DGE according to the DACH reference value for a serving of 200 grams. Tinplate packaging therefore preserves the food ingredients particularly well. Since neither light nor air can reach the contents, vitamins and minerals are preserved for a long time.

A clear myth. The majority of those surveyed, namely 52 percent, find canned food miOel tasty. Even if this question is to be regarded purely subjekdv, however, it can be stated that LebensmiOel from the can retain their taste, because they are filled and made durable particularly carefully and directly after the harvest. Tomatoes in particular, however, develop their full flavor in tinplate packaging - one more reason to use canned tomatoes when preparing fruity red sauce.

Myth 3: Food from tinplate cans is not healthy

Many respondents are on the wrong track with this statement. That's because half disagree with the statement "canned foods are healthy." 13 percent do not know whether the statement is true or not. Of course, it depends on the individual diet, but: vegetables and fruits from food cans retain their vitamins particularly well. And: canned foods offer a range of healthy products from fruits and vegetables, legumes, fish, soups and stews to coconut milk for a balanced diet. Such foods are especially suitable for salads or as a supplement in alternative diets.

Here, the majority of respondents rightly agree: canned foods do indeed have a long shelf life, in some cases even longer than stated. 87 percent of respondents said they agreed with this statement. Food is canned fresh from the harvest. When they are canned, they are heated - which not only kills microorganisms, but also means the food is already cooked. This not only prepares the ingredients directly for cooking, but also gives them a very long shelf life.

Sure, it's true. Many consumers have realized that using canned foods saves time. 81 percent of respondents agree with the statement "Canned foods save you time." And that's true, because food from tin cans is already cut into small pieces and even pre-cooked. They do not have to be thawed in a time-consuming process. This saves time when cooking and preparing meals. Since the food only needs to be reheated, its preparation also requires even less energy.