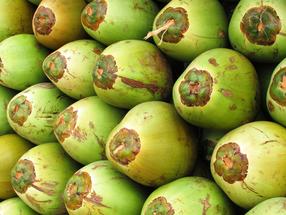 An exotic is conquering the kitchen: coconut oil is becoming increasingly popular. A doctor from Freiburg warns against this and initiates a debate. Scientists and conservationists support them. And name the disadvantages of oil.

Nutrition experts recommend a restrained consumption of coconut oil. The vegetable fat produced from the nutritive tissue of coconuts is enjoying increasing popularity among consumers, said Antje Gahl, spokeswoman of the German Nutrition Society (DGE). However, it contains many saturated fatty acids. These posed a health hazard. Among other things, they increased the risk of cardiovascular diseases. Gahl told the German Press Agency that coconut oil wrongly has a positive image.

The physician Karin Michels recently initiated a heated discussion about the advantages and disadvantages of oil. In a lecture, the director of the Institute of Prevention and Tumour Epidemiology at the University Hospital in Freiburg described the food as "the pure poison" and advised against consumption. The statements published on the video platform YouTube have met with great response and very emotional criticism, said a spokesperson for the hospital. The aim of Michels was to provide information on nutrition and health.

The statements of Michels are trenchant, Gahl said. However, they were correct in the matter. Several international studies have proven the health risk posed by coconut oil. Nevertheless, exotic fat benefits from the trend towards international as well as vegan and vegetarian cuisine. There is an increasing demand in the trade.

Those who occasionally use coconut oil for cooking need not worry, said nutritionist Gahl. Often used, however, it is harmful. That coconut oil helps to lose weight, as the advertising suggests, is simply wrong, Gahl said.

Even nature conservationists cannot warm up to coconut oil. Due to long delivery routes and often questionable cultivation methods, the ecological balance is poor, said Ilka Petersen, land use and sustainable biomass consultant at the environmental organisation WWF Germany. Minimum ecological and social standards would hardly be met.

In addition, the trade is putting increasing pressure on coconut farmers. Despite rising demand, they could hardly live off their earnings; the majority of the profits go to the numerous intermediaries in the industry. The social and economic conditions for farmers urgently need to be improved. (dpa)