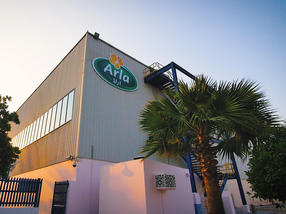 - Today, Arla Foods inaugurated a state-of-the-art cheese production facility in the Kingdom of Bahrain. The aim is to better serve the growing demand for dairy products in the Middle East and North Africa (MENA region: Middle East and North Africa). 50 million are planned to be invested in the site over the next two to three years in order to further increase capacity. This should make the plant the company's most important production centre in the MENA region. Arla will also create more than 100 local jobs in the next two to three years. The inauguration of the plant is the next step after Arla's acquisition of the regional processed cheese business of Mondeléz International in May 2019. Part of this acquisition was also the production site in Bahrain, which now belongs to Arla.

The majority of the products that Arla sells in the region are now produced locally at the plant in Manama, the capital of Bahrain. This will enable the company to further expand its production of branded cheese products and make its supply chain even more efficient. By 2025, Arla expects to increase its annual production in Bahrain to more than 100,000 tons under the Puck®, Arla®, Dano® and Kraft® brands as well as its own brands. At the same time, more than 100 new jobs will be created locally as part of the production expansion.

Arla Foods S.P.C. currently produces around 16,000 tons per year and has an innovation pilot plant at the site. The plant was built in 2008 and has already won several awards for excellent production processes in cheese core categories. As a result of the relocation of the production of processed cheese and sterilized cream from other Arla sites to Bahrain, the company expects to extend the shelf life of these products by up to six weeks. Because the processing time and the transport time to the customers in the MENA region are considerably shortened. The plant's products will be sold primarily in the Middle East, but also in the USA, West Africa and Southeast Asia.

Zayed Rashid Alzayani, Minister of Industry, Trade and Tourism, said at the inauguration: "We are delighted to welcome Arla as part of the Bahrain production landscape. The Ministry of Industry, Trade and Tourism will continue to play its important role in attracting foreign direct investment, facilitating business activity and supporting growth in line with our plans for economic diversification and expansion".

Khalid Humaidan, Managing Director of the Bahrain Economic Development Board, added: "Arla is the newest member of numerous international manufacturing companies that have made Bahrain a home for their regional activities. Today's inauguration of Arla's largest plant outside Europe testifies to Bahrain's position as a leading location for companies seeking access to the region's $1.5 trillion market. The Kingdom offers investors a number of competitive advantages, including the availability of a highly skilled local workforce and competitive operating costs".

In his speech at the inauguration, Peder Tuborgh, CEO of Arla Foods, said: "The Middle East and North Africa are very important sales markets for us. With the inauguration of this production site in the Kingdom of Bahrain, we are strengthening our commitment to the region. Our decision to make Bahrain the most important production centre in the MENA region shows not only our confidence in the Kingdom's fast-growing manufacturing sector, but also our support for the country's 2030 vision of economic diversification".

He added: "Dairy products are an integral part of a healthy diet. This new site will enable us to increase production and significantly accelerate our pace of innovation to meet growing consumer demand. We are convinced that Bahrain will play a decisive role in the success of Arla's growth plans. We thank our local partners and the government for their support and determination to make this day possible."

Since 2010, Arla has more than doubled its turnover in the MENA region, Arla's largest division outside Europe, through organic growth. This was driven by the success of the Puck® brand in the cheese category, the Lurpak® brand in the butter and fat spreads category and the Dano® and Arla® brands in the milk powder and UHT milk categories.

In 2018, Arla achieved a turnover of 560 million euros in retail and food service in the MENA region.