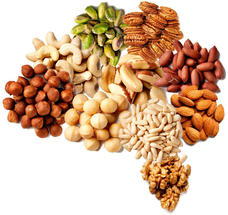 A recent INC-funded study, published in Molecular Nutrition & Food Research[1], showed that a high intake of nuts may help protect the elderly from cognitive decline.

A team of researchers examined whether a diet high in nuts might help protect against age-related cognitive decline over a three-year period.

A total of 119 participants aged 65 and over with dementia were selected from the InCHIANTI cohort, a representative population-based study of elderly residents of Chianti, Italy. Participants were selected based on their nut intake: non-nut consumers and regular nut consumers (≥2.9 g/day).

Nut exposure was measured at the beginning of the study with a validated food frequency questionnaire or with an analytical tool for the characterization of phenolic compounds. In addition, cognitive decline was measured using the Mini-Mental State Examination test.

"The use of a panel of metabolites provides accurate and complementary information on nut exposure and reinforces the results obtained using dietary information," states Prof. Andrés-Lacueva, ICREA Academia at the University of Barcelona, Group leader of CIBERFES on Frailty and Healthy Aging and principal investigator of the study.

The study was supported by the INC.