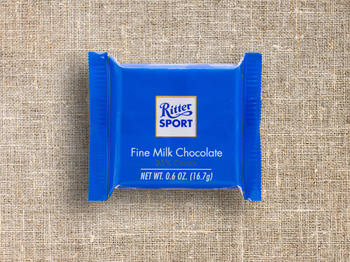 Ritter Sport chocolate clung on to its trademark square design in Germany on Thursday, thanks to a ruling from the country's top court. The Federal Court of Justice rejected two requests to have the protected brand lifted, in a final decision that ends a 10-year battle by Milka to strip its competitor of the sole rights to square chocolate bars.

The registered trademarks laying claim to the shape "do not give any significant value to the chocolate bars marketed in the packaging," the court said.

The ruling referred to Ritter Sport's slogan - "Quadratisch. Praktisch. Gut." (Square. Practical. Good.) - and said that the shape was part of a marketing strategy linked to the chocolate's origins and therefore comes with certain expectations of quality.

At the same time, the design was not considered by the judges to hold special artistic value, nor does it lead to any difference in price. "For us as a relatively small family business, the square shape has the same value as the individual purple colour does for the other side, which is also a trademark design," Ritter Sport spokesperson Thomas Seeger said, referring to Milka's purple packaging.

Milka's owner Mondelez had argued that the square shape was "a universal and common packaging shape used for several foodstuffs and sweets on the market."

"That's why it was important to us to have legal clarity over whether companies can bring square products onto the market and under what conditions," Mondelez spokesperson Heike Hauerken said.

There are exceptions, such as chocolate manufacturer Hosta, which produces square coconut chocolates called Romy. Ritter Sport does not object to these, as they are relatively unknown.

Ritter Sport was founded in 1912 and is based in Waldenbuch near Stuttgart.

According to the company's website, the square design was born in 1932 after co-founder Clara Ritter decided that the bars should be able to fit into the pocket of every sport jacket without breaking.