Bacterial colonisation of grapes, which affects the wine aroma, is influenced by environmental factors 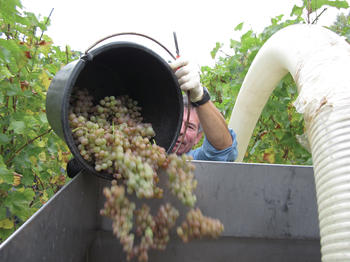 Good wine aroma also depends on the bacterial colonization. Scientists at the University of Hohenheim believe that this could be exploited in future.

Wine is appreciated worldwide for its aromatic complexity and range of variation. However, few people are likely to know that the quality, taste and aroma of the finished wine is also due to the involvement of bacteria in the fermentation process. A team led by Prof. Dr. W. Florian Fricke from the Department of Microbiome and Applied Bioinformatics at the University of Hohenheim in Stuttgart has now investigated the factors that are responsible for the growth of bacteria in fermenting grape must. "Our study shows that the strongest influence on the wine microbiome comes from bacteria on the grape surface and less from the grape juice. The strength of this influence depends on the type of wine and the integrity of the grapes before harvest. It might be possible to use this potential specifically for wine production," he summarises the results, which have now been published in Scientific Reports.

Most people are probably aware that wine is far more than just fermented grape must. Grape variety, soil, climate and weather conditions, the yeast used and the winemaking process itself are only a few of many factors that can be decisive for the quality, taste and aroma of the finished wine.

Far less well known, however, is that the aromatic complexity and variation of wines is also due to bacteria that - in addition to the yeast - are involved in the fermentation or ageing process. Probably everyone has had the experience that the long bottle, kept for special moments, "topples over" and the wine becomes undrinkable. Acetic acid bacteria have transformed it into a bad smelling and tasting liquid.

"Interestingly, the influence of bacteria must not only be negative and lead to the spoilage of wine, but can also have positive effects on the quality and aroma diversity of the finished wine," explains Prof. Dr. Fricke. Natural sources of these microbes include plant leaves and roots, the soil and the grapes themselves.

Since wine colour, aroma and taste are significantly influenced by the microbial fermentation of the grape must, the composition and function of the wine microbes and their dependence on environmental influences are of great interest. Until now, however, little is known about the individual species of bacteria, for example how they get into the wine, whether they multiply there and what aromatic differences they cause.

Even grapes have a microbiome

, which prompted the research team to pursue this question with doctoral student and first author of the publication Alena M. Bubeck. "New methods make it possible to detect a microbiome in places where it was previously not expected," explains Prof. Dr. Fricke. In this context, microbiom refers to all bacteria contained in or on the grapes or in the juice or must produced from them.

A result that Prof. Dr. Fricke is particularly pleased about: "Our data also provide insights into the absolute number of bacteria in wine. Previous studies have usually only described the ratios of the individual species to each other in terms of percentages. However, this does not allow any conclusions to be drawn about the total amount of bacteria in wine and how they change during fermentation".

Experimental material from the Hohenheim vineyard

The researchers led by Prof. Dr. Fricke cooperated with Prof. Dr. Christian Zörb and Dr. Nikolaus Merkt from the Department of Quality of Plant Products. The grapes and must came from the university's own vineyard: "We examined the must from a total of six different batches, two red and four white wines, during the first week of fermentation," reports Dr. Merkt.

Although the researchers found complex and variable bacterial communities in all wines, the two red wines showed a significantly higher bacterial diversity, consisting mainly of lactic and acetic acid bacteria and bacteria from the environment.

The absolute number of bacteria also reached up to 10 times higher values in the red wines than in the white wines. Prof. Dr. Fricke attributes these differences to the production process: "For white wine production, red or white grapes are crushed and pressed, and only the clarified juice is used for fermentation. For red wine fermentation, on the other hand, the juice from crushed red grapes is used together with skin and seeds".

Microbial ecology of the grapes depends on their state of health

But even with white wine, there are significant differences between the different varieties. And not only that: One grape variety came from two different Hohenheim cultivation areas, one of which was infested with the cherry vinegar fly (Drosophila suzukii). It was found that the infected vines had a far higher bacterial diversity than the healthy ones. According to the expert, the damage to the grape skin is presumably responsible for the increased occurrence of bacteria.

It is obvious that the microbial ecology of the grapes depends largely on their state of health. For example, the researchers found the greatest diversity of bacteria primarily in must from grapes that were exposed to stress before harvest. This was triggered on the one hand by infestation with the fungus Botrytis cinerea, which under other circumstances can also be responsible for the so-called noble rot, and on the other hand by infestation with the cherry vinegar fly, which bites the grape skin in order to lay its eggs inside the grapes.

"If it were possible to better understand and even control these environmental influences, these bacteria might potentially have the potential to specifically modify and expand the aromatic diversity of wine," speculates Prof. Dr. Fricke.