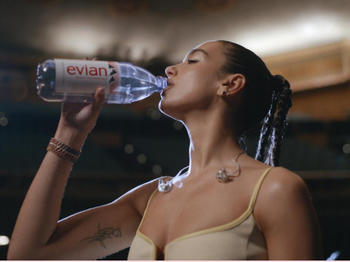 evian today launches its new Drink True platform, with a striking campaign featuring Global Ambassador Dua Lipa. The stunning short film sees Dua connect to her true self and perform in a stripped-back and pure style, showcasing her natural talent.

The documentary style film follows Dua Lipa in real time, as she walks on stage to complete a soundcheck. We see Dua relaxed and happy, as she prepares for her performance.

When Dua walks on stage there is a sense of calm. After hydrating herself with a sip of evian, Dua is ready for her soundcheck and to perform a mesmerizing a cappella version of her hit single Levitating – off of her platinum album Future Nostalgia which has a staggering 7 billion streams.

evian partnered with award-winning Director, Vincent Haycock, on the new Drink True commercial. Haycock has previously worked with a range of global talent and perfectly brought to life the intimate details of the commercial; illustrating the authentic moment in which Dua’s voice breaks through the silence with nothing to hide.

Dua Lipa said: “I had so much fun filming the new Drink True ad for evian. Stripping everything back to a beautiful and calm flow felt refreshingly different. It’s not often I get the chance to pause and sing my music a cappella, so I hope the fans enjoy it. Being part of this campaign means a lot to me; I have always found that being true to myself is extremely empowering and I love that it is important to evian as well.”

Commenting on the new global campaign, Shweta Harit, VP of Marketing at evian, said: “Dua Lipa’s iconic music and raw talent make her the perfect match for our uniquelysourced evian natural mineral water. At evian we believe in empowering, liberating and greatly improving both people and the planet. We owe everything to nature, so in accordance with the Drink True campaign, it’s important to be honest and transparent about how we continue to deliver our natural mineral water in a more sustainable way.”

Dua Lipa was announced as the new global ambassador in July 2020, when she became the first female music artist to join the evian team.

A champion of the young-at-heart, Dua empowers those who have new ideas and authentic energy that will challenge the status quo and regenerate the world; moving culture forward with their passion and consciousness.

Like Dua, evian is a champion of empowering positive change through supporting young people's creativity. Earlier this year, evian launched the Activate Movement Competition as the brand looks to invest in future generations, sustainable design solutions and progressive innovation. evian has also recently donated to the Virgil Abloh “Post-Modern” Scholarship Fund which aims to foster equity and inclusion within the fashion industry by providing scholarships to students of academic promise of Black, African-American, or of African descent. evian will continue to provide support to this scholarship on a long-term basis.

The Drink True campaign follows a series of exciting announcements as the brand continues to demonstrate its commitment to a more sustainable future. Last year, evian gained global certification for becoming carbon neutral, and across the year the brand continues to take steps towards its goal of becoming a circular business model by 2025.