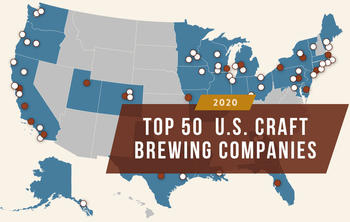 “The COVID-19 pandemic drastically changed where Americans purchased alcohol in 2020. Breweries who had established packaging and distribution capacity were best positioned to take advantage of the boom in off-premise sales and weather market uncertainty,” said Bart Watson, chief economist, Brewers Association. “These businesses also saw variation in performance based on geography and business model, with different parts of the country seeing very different beer trends, and draught-heavy breweries suffering.”

1 Figure based on companies that met the craft brewer definition for all or part of 2020. An American craft brewer is a small and independent brewer. Small: annual production of 6 million barrels of beer or less (approximately 3 percent of U.S. annual sales). Beer production is attributed to the rules of alternating proprietorships. Independent: less than 25 percent of the craft brewery is owned or controlled (or equivalent economic interest) by an alcoholic beverage industry member that is not itself a craft brewer. Brewer: has a TTB brewer’s notice and makes beer.