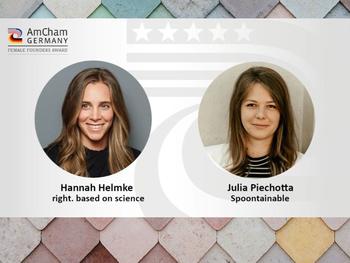 Founder of the startup Spoontainable receives the Female Founders Award

The female founding team of the Heidelberg-based startup Spoontainable has already achieved numerous milestones with the development of the edible spoons. The team, which now has eight members, continues to work steadily on the development of further sustainable plastic alternatives and the internationalization of the products. In the meantime, the startup has been able to expand its customer network to 12 countries within the EU and 4 other international countries. Among others, Spoonies are already established on the Israelian and Australian market. For the entrepreneurial achievement the founder Julia Piechotta is awarded.

„I am incredibly proud of the accomplishments and milestones that Amelie and I and our entire Spoontainable team have achieved over the past few years. I am even more pleased that we as a team have won the Female Founders Award. It is only through the motivation and passion of each individual that we celebrate Spoontainable's success today. We would like to be a role model for all other (female) founders and show that the success of a company does not depend on gender.

Hannah Helmke also receives the Female Founders Award with her startup right. based on science. Right. based on science offers a software solution and metrics to calculate, for example, a company's contribution to global warming. Furthermore, the founders Dr. Amelie Wiedemann from DearEmployee, Katharina Mayer from Kuchentratsch as well as Dr. Sophia Doll from OmicEra Diagnostic were on this year's shortlist.