Progress in the functional characterization of human olfactory receptors 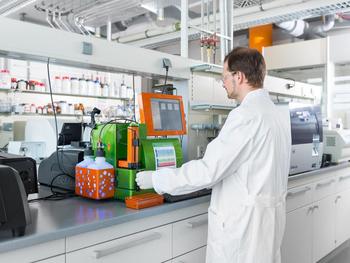 Lab at the Leibniz Institute for Food Systems Biology at the Technical University of Munich: Dr. Patrick Marcinek analyzes cells with a flow cytometer. 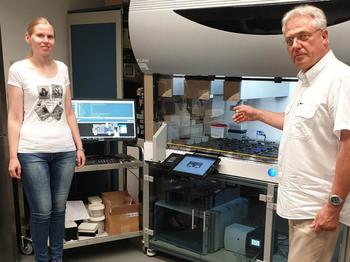 Dr. Franziska Haag (l) and PD Dr. Dietmar Krautwurst in front of the high-throughput pipetting and measuring robot (TECAN Fluent®). They use the device to investigate the odorants to which human olfactory receptors react.

A team of scientists from the Leibniz Institute for Food Systems Biology at the Technical University of Munich has now discovered that the odorant receptor OR5K1 is specialized to recognize pyrazines in both humans and domesticated animals. These are volatile substances that contribute to the typical odor of many vegetables or are formed when food is heated. In addition, pyrazines also play a role as signaling substances in intra- or interspecific communication. The new research results contribute to a better understanding of the molecular mechanisms underlying the odor perception of food as well as olfactory communication.

Olfactory perception is crucial for the recognition and selection of food as well as for the enjoyment when eating. Everyone knows this at the latest when nothing tastes good anymore due to a blocked nose. The perception of odors also influences the behavior of many animals.

For 80 percent, the odor spectrum is unknown

The genes for the receptors with which we perceive odors have been known for over 30 years. However, despite intensive research, the specific odorant spectrum detected by about 80 percent of human olfactory receptors is still unknown.

New findings in this area could help to develop biobased "artificial noses" that can be used, for example, to monitor the sensory quality and authenticity of food. In addition, they could provide insight into the physiological functions of these receptors that go beyond the sensory perception of food.

"In particular, odorants such as pyrazines are interesting in this regard. This is because some of them, as key odorants, shape the typical aroma of food and, at the same time, play a major role as volatile signaling substances in olfactory communication of animals. A good example is wolves, which leave scent messages in their territory via their urine and thus mark it," says team leader Dietmar Krautwurst.

Pyrazine with a dual function

Trimethylpyrazine is one such substance. It is formed during roasting processes, and its scent is reminiscent of baked potatoes, roasted nuts and cocoa. It is therefore a frequently used flavoring agent in the food industry. Likewise, this substance is naturally present in the urine of foxes and wolves and puts mice on alert as soon as they smell it.

However, it was previously unknown which of the human olfactory receptors react to pyrazines. Therefore, the research team used a cellular assay system established at the institute to investigate the responses of over 600 human receptor variants to trimethylpyrazine. As the study results show, the odorant receptor OR5K1 was the only one of the tested variants to react to the substance. A check of the receptor with further odorants showed that it selectively recognizes 18 other pyrazines. For the test, the team used, among other volatiles, 178 key odorants that shape the aroma of food, including some pyrazines.

"Strikingly, those pyrazines, which activate the receptor most potently, function both as food odorants and signaling substances in the animal kingdom," reported Franziska Haag of the Leibniz Institute of Food Systems Biology at the Technical University of Munich, who, together with her former colleague Patrick Marcinek, played a key role in the study. As the study results also showed, corresponding (homologous) olfactory receptors of domestic and farm animals, but also of mice, responded in a similar way to the tested pyrazines as the human receptor. "We therefore assume that the recognition spectrum of the OR5K1 odorant receptor has evolved under the influence of domestication," explains Dietmar Krautwurst. Veronika Somoza, director of the Leibniz Institute adds, "In the future, we will use our unique, extensive odorant and receptor collection at the institute to decipher the function of human olfactory receptors."