The financing aims to accelerate the company’s growth in the U.S., unlock new geographies and product categories, and scale up the company’s proprietary patented A.I. technology 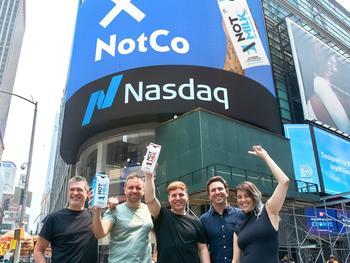 Since its inception five years ago, NotCo has seen explosive growth on the global market, being the only company to disrupt three main animal-based protein categories simultaneously – dairy, eggs, and meat – something no other competitor in the world has achieved so far. The company operates in five countries in both retail and foodservice, and already has five U.S. patents for its proprietary A.I. technology.

“Our patented A.I. gives us a significant competitive advantage due to the speed and accuracy with which we’re able to develop and bring new products to market,” said NotCo Founder and CEO, Matias Muchnick. “The level of enthusiasm we’ve received from our partners is thrilling and humbling. We all share the same vision for Giuseppe’s ability to catapult plant-based foods into mainstream adoption at a rapid pace by focusing on taste, sustainability, and infiltrating multiple categories at once. We are grateful to have the support of Tiger Global as we build a food tech brand with the global reach and capability to reinvent the food industry.”

NotCo has raised more than $350 million to date and the Series D will bolster its expansion into new categories in North America, scale the core of its proprietary A.I. technology, and accelerate plans to launch in Europe and Asia. The round comes just one month after a substantial investment from Enlightened Hospitality Investments (EHI), where Shake Shack founder and QSR trailblazer, Danny Meyer, is a partner; and nine months following an $85 million Series C co-led by Future Positive and L Catterton. The Series D round included follow-ons from NotCo’s roster of industry-leading investment firms, including Bezos Expeditions, EHI, Future Positive, L Catterton and Kaszek Ventures.

"NotCo has created world class plant-based food products that are rapidly gaining market share," said Scott Shleifer, Partner, Tiger Global. "We are excited to partner with Matias and his team. We expect continued product innovation and expansion into new geographies and food categories will fuel high and sustainable growth for years to come."

NotCo’s accelerated growth is enabled by Giuseppe, its proprietary, one-of-a-kind, artificial intelligence technology that allows the company to create true plant-based replacements faster, better, and more accurately than anyone else in the industry. Giuseppe’s algorithms analyze thousands of plants in its database to come up with unique combinations that replicate animal-based products almost to perfection.

NotCo launched NotMilk™ in the U.S. seven months ago and is on track to reach 8,000 retail doors by end of year, already available nationally in Whole Foods Market, Sprouts, Wegmans and more. This staggering success is also unmatched in Latin America, where the company has become the fastest-growing food tech company offering superior tasting plant-based products in Brazil, Argentina, Chile and Colombia, and quickly expanding to Mexico and more. The company sells NotMilk™, NotBurger™, NotMeat™, NotIceCream™ and NotMayo™ in more than 6,000 retailers globally, runs its own direct to consumer ecommerce, and holds successful partnerships with Burger King and Papa John’s.