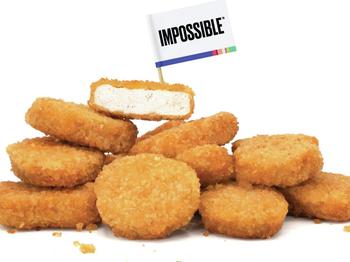 Plant-based meat products maker Impossible Foods on Tuesday launched its meatless chicken nuggets in restaurants. The company also plans to make the new product available in supermarkets by the end of the month.

"We are tremendously excited about our Impossible Nuggets. But this launch isn't really about nuggets. It's about the historic inflection point we've reached. For the first time, consumers unquestionably prefer meat made from plants instead of meat from an iconic animal,"

said Pat Brown, founder and CEO of Impossible Foods. "In the battle for the future of food, this is the first time David has categorically bested Goliath, but it won't be the last."

Impossible's meatless nuggets are made from soy and sunflower oil. According to the company, the nuggets have 40 percent less saturated fat and 25 percent less sodium than animal-based chicken nuggets.

The product will be available with leading retailers including Walmart, Kroger, Albertsons, Safeway, ShopRite, Giant Stores, Gelsons later this month. Impossible Foods plans to will expand availability to more than 10,000 grocery stores later this year. (dpa)