Quickly and precisely determining the flavor profile of cocoa samples 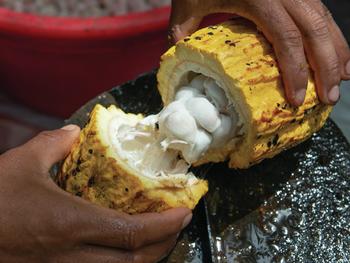 Photo by Rodrigo Flores on Unsplash

With the help of research results obtained by means of a new methodology, scientists are laying the foundation for a world map in which comprehensive data on flavor-relevant cocoa ingredients are recorded.

Because a plethora of flavor compounds contribute to the distinctive taste of cocoa, its composition is difficult to analyze. Now, scientists at the Technical University of Munich (TUM) and the Leibniz Institute of Food Systems Biology (LSB) have developed a new methodology that quickly, easily, and precisely quantifies the flavor profile of cocoa samples.

The new method is already suitable for practical use in companies and can be applied at any point along the value chain from cocoa beans to chocolate. In addition, the initial research results obtained using the new method lay the foundation for a world map containing comprehensive data on flavor-relevant cocoa ingredients.

“In the future, such a map could help to further optimize processing and production processes by making the flavor profiles of cocoa-containing products, such as chocolate, objectively predictable on the basis of molecular parameters,” says food chemist Andreas Dunkel of the LSB, who played a leading role in the study.

Various flavor substances including secondary plant compounds, such as health-promoting flavanols, are crucial for the taste of cocoa. The particular class of these substances is what creates the typical astringent feeling in the mouth which strikes us as the pleasantly bitter and slightly sour taste of cocoa or chocolate.

In cocoa producing countries, quality assessment of cocoa is currently carried out mainly by random visual inspection of the beans (cut test) and sensory trained personnel. In addition, chocolate manufacturers use time-consuming and personnel-intensive methods to test the quality of cocoa.

The new method offers significant advantages over these conventional analytical methods. “Our new methodology requires minimal sample preparation and provides quantitative data on 66 taste-decisive substances using a single mass spectrometric platform,” says Thomas Kauz, who made crucial contributions to the development of the method as part of his doctoral thesis at the Chair of Food Chemistry and Molecular Sensory Analysis at TUM. “Traditional techniques make it possible to analyze about 10 samples per week, whereas this new method allows an analysis of 200 in that time,” according to Professor Corinna Dawid, who is head of the department on behalf of Professor Thomas Hofmann. Furthermore, she states, the methodology can be easily implemented into industrial workflows.

75 cocoa samples from around the world

The team of scientists tested their new methodology on a set of 75 cocoa samples from around the world. They compared unroasted samples with those that the researchers had roasted in the lab using a uniform standard procedure. “Interestingly, we found that the roasting of the cocoa influenced the flavor profile more than the respective regional origin of the beans,” declares Andreas Dunkel.

With the help of the new methodology, it is now possible to investigate the influence of other factors including the genetic predisposition of the plants and the type of fermentation, as well. Professor Veronika Somoza, director of the LSB, and Professor Corinna Dawid both agree that a long-term goal of the joint research at TUM and LSB is to supplement the world map of cocoa with all these data on sensory active substances.