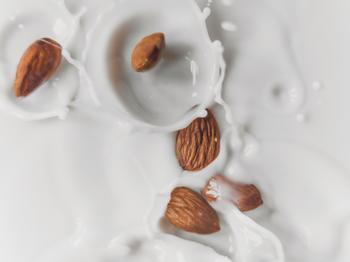 Photo by Austin Wilcox on Unsplash

Oatly has been successful, and ‘flat replacement models’ are coming soon. We are seeing several large companies, such as Nestle, Danone and Pepsi, have launched oat milk, and brands-  Daily Box, Ogilvy Planet and Plant Label have stepped onto the plant protein track. In the China plant-based market, new products in categories such as oat milk, almond milk, pistachio milk, and padamone milk are emerging.

The key for plant-based dairy to seize the market

Oatly has been successful because of its focus on one specific segment: oat milk, as well as its effective marketing in the foodservice sector. Therefore, we suggest brands focus on two aspects:

First is to develop plant ingredients that are of consumers’ interest. Mintel finds that the top three ingredients that generate most interest are black bean (eg Doubendou), pistachio (eg Panpan plantag Aug 2021) and cashew (Hema X Weiguoqing Mar 2021). At the same time, more than half of respondents claim that they would like to try plant-based drinks with multiple plant protein sources. This said, mixed drinks with popular plant ingredients would be helpful for brands to capture market share.

Secondly, besides using the commonly used claims in the market – such as low-energy and high fiber, brands need to highlight the protein level of their plant-based products. In fact, nearly half of respondents think a high level of protein content is the most important factor when choosing a plant-based drink.

The main groups of consumers would like plant-based dairy

In fact, according to a survey conducted in the past January, only a quarter of respondents actually know if they are lactose intolerant or not. So it would be a relatively small market if plant-based drinks only target lactose-intolerant consumers. Thus the main consumer group, according to our observation, are those health-conscious people who are asking for natural products.

Mintel has observed that two-thirds of respondents have increased their frequency of healthy eating compared with before the COVID-19 outbreak. And more than two in five of respondents think that a healthy diet should contain both animal and plant protein. So the pandemic has encouraged health-conscious people to consume more plant-based drinks to complement their healthy diets.

In fact, it is also observed that compared to milk and soymilk, other plant-based drinks (such as oat, almond, coconut) are perceived to have a lower level of protein, as well as high-quality protein. Therefore, instead of following Oatly’s foodservice-led marketing strategy, we suggest that brands focus on the retail segment and enhance the protein claims of products, to be more competitive in the market.