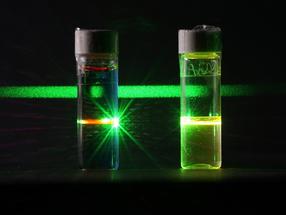 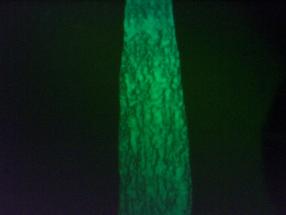 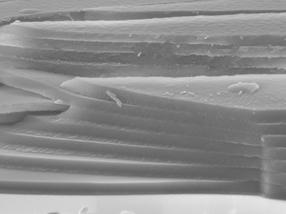 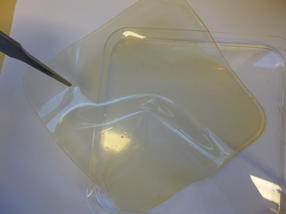 At ICE 2019, the Fraunhofer Institutes for Applied Polymer Research IAP, for Interfacial Engineering and Biotechnology IGB and for Organic Electronics, Electron Beam and Plasma Technology FEP will present innovative technologies for sustainable food packaging. They each have extensive expertise in processing, process development and control, the development of special polymer films and the deposition of ultra-thin layers for the packaging industry.

The topic of product and food packaging is more relevant and more present than ever. Almost everyone already has the image of the immeasurably large plastic vortex in the oceans in mind when shopping and selecting plastic-packed meat or vegetables. At the latest when food is stowed at home, the amount of outer packaging becomes clear. The figures from the Federal Environment Agency speak for themselves – in total, every German produces around 220 kilograms of packaging waste annually.

A complete avoidance of packaging film, however, is hardly feasible. Hygiene standards, transport routes and ultimately the purchasing behavior of customers with regard to fresh food at affordable prices require hygienic, functional and safe packaging, because bacteria, viruses and moulds can easily spoil food everywhere and can also cause serious illnesses.

The EU joint project "NanoPack", launched in 2017, focuses precisely on these challenges and aims to develop state-of-the-art antimicrobial packaging solutions for perishable foods based on natural nanomaterials in order to prevent outbreaks of food-borne diseases and reduce food waste due to early spoilage. The economic aspect of production, upscaling and validation (including regulatory requirements) was also considered in order to produce marketable and cost-effective food packaging.

Halloysite nanotubes (HNTs) for use in food packaging are being investigated as the basis for developing the new packaging solutions in the NanoPack project. By modifying the surface of this nanomaterial, essential oils such as thyme oil can be efficiently released integrated into a packaging film. The essential oils released as steam reduce the growth of microbes both on the product surface and in the packaging room. The scientists at Fraunhofer IAP play a leading role in the development of treatment processes and the surface functionalization of HNTs as well as in compounding, i.e. the integration of particles – loaded HNTs – in polymer films.

Process control methods are also relevant in this context, which Fraunhofer IAP will also present. In the production of thin, transparent layers, such as in packaging films, in-line process control can contribute to quality assurance and improvement and expensive material components can be used efficiently. Through complete monitoring, the manufacturing process can be optimized in such a way that only as much of a functional component (e.g. an oxygen barrier layer or a laminating adhesive) is used as is necessary for its function, which can lead to considerable material and cost savings. Fluorescent dyes are used as additives in the functional layer in order to measure the distribution of the layer thicknesses by measuring the fluorescent light. The dye is added to the coating material in such small quantities that it is not visible and the material properties are not affected. By combining novel packaging materials with effective process control, scientists aim to make future food packaging safer and at the same time cheaper.

The scientists at Fraunhofer IGB are also working on processes for functionalizing packaging films. In order to be able to produce the widest possible range of surface properties, IGB is pursuing the approach of functionalizing polymer films using plasma/CVD and wet-chemical processes – or combinations of these technologies. This creates barrier layers against the permeation of oxygen and water vapor for outer packaging as well as barrier layers that prevent the release of polymer additives from the outer packaging into a food or pharmaceutical product.

The challenge here is that the layers must be elastic to a certain extent so that they do not break or crack on the polymers. The Fraunhofer researchers therefore realize the coatings in the form of several mechanically decoupled layers, which are successively deposited »layer by layer« in the plasma. »By optimizing various plasma process parameters such as the type and quantity of precursor gas used, the excitation frequency, the gas flow, the pressure and the treatment time, we can successively produce glass-like layers with the desired barrier function and silicone-like elastic intermediate layers«, explains Dr. Jakob Barz, group leader for »Plasma Technology and Thin Films« at IGB. In this way, the researchers were able to increase the barrier effect of plastic films against water vapor and oxygen by a factor of up to 1000 compared to untreated material. The deposited barrier layers can also be combined with another layer to improve food run-off when emptying a film package.

Currently, Fraunhofer IGB is also conducting research on biobased layers with a barrier function against oxygen and water vapor. At ICE europe, the institute is presenting the first barrier coatings and films that consist of 100 percent natural starting materials and also have antioxidant or antimicrobial properties. »We produce these films and coatings from a newly developed water-based dispersion that contains natural waxes and proteins. The dispersion can be processed using conventional coating techniques,« explains Dr. Michaela Müller, head of the IGB research group »Polymeric Interfaces and Biomaterials«. The big advantage is that the layers are also 100 percent degradable and can thus help to reduce plastic waste. The development is part of the IGF project BioActiveMaterials, in which the Fraunhofer IVV is also involved.

Functionalization for lamination and adhesion

The Stuttgart researchers are modifying polymer films with specific chemically functional groups in order to change surface properties that are required for subsequent process steps such as adhesion. Amino functionalization can also be limited to the edge area of packaging films using gas-phase and wet-chemical process steps and used for laminating the films.

For a longer shelf life of food, the packaging must be free of contaminating germs. Depending on the material, microorganisms on packaging are usually inactivated by heat, gas, ionizing or UV radiation. Low-temperature plasmas used at IGB are a material-friendly alternative to sterilization at high temperatures. They are not only suitable for creating layers, but can also inactivate microorganisms due to reactive molecules and UV radiation in the plasma process. »With plasma sterilization, even highly resistant endospores of different Bacillus species become unable to reproduce after relatively short treatment times«, says Barz.

In addition, scientists at Fraunhofer IGB have further developed UV treatment in order to minimize the number of reproductive microorganisms on surfaces. With new, specially designed excimer lamps or the latest UV LED technology, packaging films can be sterilized quickly and effectively. These processes can be scaled up on packaging machines and adapted to individual requirements.

The market for packaging films is extremely price-sensitive. Fraunhofer FEP devotes itself to this aspect by developing highly productive finishing processes, which are characterized in particular by very high speeds. One example is the production of transparent barrier layers of aluminum oxide against external influences such as moisture or oxygen on plastic films using plasma-activated high-rate deposition at web speeds of several meters per second. Therefore, Fraunhofer FEP operates so-called roll coaters, which can efficiently coat film material with a width of up to 700 mm and web lengths of several kilometers. The researchers are currently working on qualifying this established technology for use on biobased materials.

A further example is the modification of polymer materials when they already exist as films. For this purpose, Fraunhofer FEP operates a roll-to-roll system that uses electron beam irradiation to modify the structure of the polymer molecules. Effects such as the adaptation of the modulus of elasticity or the thermal resistance can be achieved. The proof for fossil-based polymer films has already been provided in the past. The extent to which the effects can also be determined with biobased materials is currently being investigated. Dr. Steffen Günther explains: »This treatment takes place at atmospheric pressure and not under vacuum. The pilot plant at Fraunhofer FEP atmoFlex 1250 is used for this purpose. Due to its web width of 1250 mm, a high throughput in the treatment of films at web speeds of up to 150 m/min can be achieved. Both aspects allow a very cost-efficient processing of the films.«

With their research, the three Fraunhofer Institutes want to make a significant contribution to waste avoidance. While at the same time increasing the shelf life of food, the approaches presented for the development of biobased packaging films are intended to generate positive benefits for customers, the environment and producers.