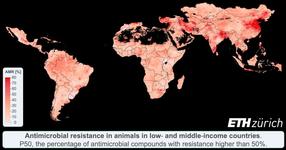 Researchers from ETH Zurich, Princeton University and the Free University of Brussels gathered nearly 1,000 publications and unpublished veterinary reports from around the world to create a map of antimicrobial resistance in low- to middle-income countries since 2000. The proportion of antibiotics showing rates of resistance above 50% increased in developing countries where meat consumption has sharply increased, meaning that antibiotics that could be used for treatment failed more than half the time. The researchers found that antibiotic resistance in livestock was most widespread in China and India, with Brazil and Kenya emerging as new hotspots. Black areas had insufficient data.

The growing appetite for animal protein in developing countries has resulted in a smorgasbord of antibiotic consumption for livestock that has nearly tripled the occurrence of antibiotic resistance in disease-causing bacteria easily transmitted from animals to humans, according to a recent report in the journal Science.

Researchers from ETH Zurich, the Princeton Environmental Institute (PEI), and the Free University of Brussels gathered nearly 1,000 publications and unpublished veterinary reports from around the world to create a map of antimicrobial resistance in low- to middle-income countries. They focused on the bacteria Escherichia coli, Campylobacter, Salmonella, and Staphylococcus aureus, all of which cause serious disease in animals and humans.

Between 2000 and 2018, the proportion of antibiotics showing rates of resistance above 50% in developing countries increased in chickens from 0.15 to 0.41 and in pigs from 0.13 to 0.34, the researchers reported. This means that antibiotics that could be used for treatment failed more than half the time in 40 percent of chickens and one-third of pigs raised for human consumption.

The researchers found that antibiotic resistance in livestock was most widespread in China and India, with Brazil and Kenya emerging as new hotspots. Since 2000, meat production has accelerated by more than 60% in Africa and Asia, and by 40% in South America, as countries on those continents shifted from low- to high-protein diets. More than half of the world's chickens and pigs are in Asia.

"This paper is the first to track antibiotic resistance in animals globally and it finds that resistance has gone up dramatically during the past 18 years," said co-author Ramanan Laxminarayan, a senior research scholar in PEI. The research was supported by the PEI Health Grand Challenge program and included co-author Julia Song, a graduate of Princeton's Class of 2018 and a past PEI research assistant.

"We certainly do want higher-protein diets for many people, but if this comes at the cost of failing antibiotics, then we need to evaluate our priorities," Laxminarayan said.

Meat production accounts for 73% of global antibiotic use. Antibiotics have made large-scale husbandry and widespread meat consumption possible by reducing infection and increasing the body mass of livestock.

The researchers suggest that developing nations should take action to restrict the use of human antibiotics in farm animals and that affluent nations should support a transition to sustainable farming, possibly through a global fund to subsidize biosafety and biosecurity improvements. Otherwise, the unrestricted use of antibiotics in even greater numbers of animals raised for human consumption could lead to the global spread of infectious bacteria that are increasingly difficult to treat.

"Antimicrobial resistance is a global problem," said Van Boeckel, who was a Fulbright Scholar at Princeton from 2013-2015. "This alarming trend shows that the drugs used in animal farming are rapidly losing their efficacy."