Knowledge of the origin of the food makes it taste better 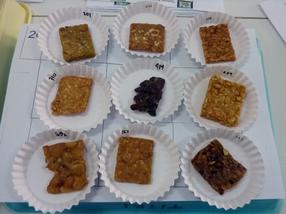 These are the 9 different types of tempe were tested in the study.

Well-known foods taste the best, but if we know where the food comes from and how it is made, it gets better, even if we don't think the taste is spot on. New research from Future Consumer Lab at the University of Copenhagen demonstrates this.

The research was conducted in Indonesia with the participation of young Indonesians who rated modern and traditional versions of tempe, which has a long tradition in Indonesian cuisine and consists of beans fermented with a type of fungus.

Why tempe is sustainable

Tempe is a sustainable food for several reasons. Legumes fix nitrogen from the air and can thus be grown efficiently without the input of nitrogenous fertilizers, while simultaneously improving the soil for other crops. Tempe is high in protein, and during the fermentation vitamin B12 is formed, which we otherwise obtain predominately from animal products. For centuries, tempe has been an important source of protein in Indonesia and the rest of the world could very well benefit from this food, which can often be made with local produce.

The researchers let the young people judge the taste of 5 modern and 4 traditional versions of tempe. It turned out that the young people liked the modern versions as long as they were only considering the taste. But when the researchers provided information about the background of the different versions of tempe, it changed both the taste and how well they liked the traditional versions.

"When the young people were told that the tempe in front of them was made from local ingredients with traditional production methods, the information made the products taste significantly better," explains one of the researchers behind the study, Associate Professor Michael Bom Frost from the Future Consumer Lab, Department of Food Science at the University of Copenhagen (UPCH FOOD).

The traditional tempe is being supplanted by the modern, industrially produced versions that have a more standardised taste, which researchers believe is one of the reasons for this result.

"We know from other research that we really like the taste of something we can recognise, and therefore it is not surprising that the young Indonesians like the modern versions of the tempe best, as it is simply these versions that they know best," says Michael Bom Frost.

Earlier research has also shown that the narrative of a food can influence the taste of the dish, but the research here specifically showed that it was the pride in a traditional dish with deep roots in the participants' own culture and made of local produce that made the food taste better.

"Much more than taste and how much we like what we eat affects our behaviour. Here it was clear that other elements of the experience, such as the pride of eating food made from local produce and using traditional production methods, significantly changed the perception of the food. There are a lot of feelings about food that are connected to where it comes from," explains Michael Bom Frost.

That is why it might be interesting for producers in Indonesia to formulate strategies that take into account the fact that consumers have strong positive feelings about the traditions. It has a major impact on how food production can be modernised in a way that is developed and streamlined while keeping consumers connected to their original food culture.

How the research was carried out

165 young Indonesians tasted nine different kinds of tempe twice in a sensory lab - 5 traditional types and 4 modernised versions. The tempe served was prepared in the simplest way: briefly fried in oil after a short marinating in a brine of salt and garlic. This is a very common method of preparing it in Indonesian cuisine. The first time, the participants were given no information about the samples. The second time, they were told the types of beans used, whether they were local or imported, and whether modern or traditional production methods had been used. They had to answer several types of questions for each taste sample: How well do you like it? What does it taste like? What overall characteristics (e.g., familiar and authentic) does the sample have? What emotions (e.g. pride and enthusiasm) does the taste evoke in you?