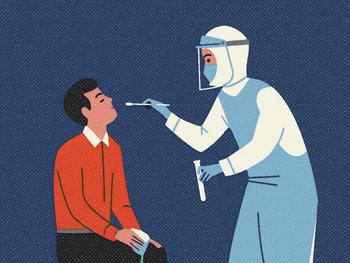 German police deployed hundreds of officers Thursday across two western regions that have been placed under a renewed pandemic lockdown in an attempt to contain a coronavirus outbreak linked to a slaughterhouse.

Swathed in white protective gear, officers accompanied local council workers making house calls on people who were under quarantine to make sure they were at home.

Some of the checked-on individuals worked at the large slaughterhouse that has had about 1,300 people test positive for COVID-19. But caught in the same net _ or rather, behind steel barricades erected by authorities _ were workers at other local companies who happen to live in the same apartment buildings as those from the slaughterhouse owned by the Toennies Group, Germany's biggest meat processing company.

Many are migrants from Eastern Europe who come to Germany legally in the hope of earning many times what they might make in their home countries. Now, they rely on food delivered by their companies or help from friendly neighbors such as Aved Elias, who brought trolleys full of goods to quarantined residents Wednesday.

Elias' comment reflect widespread sympathy in the city of Guetersloh for the migrant workers, whose often dire workplace and living conditions have been put in the spotlight by the coronavirus outbreak. Like other companies in the German meat industry, Toennies has long used subcontractors for much of the work in its plants, a practice that critics say allows the company to avoid the stricter oversight it would face if it employed workers directly.

North Rhine-Westphalia state governor Armin Laschet, whose center-right party has received significant donations from Toennies over the years, acknowledged this week that the company's ``readiness to cooperate could have been greater.''

Officials on Thursday announced the opening of five new coronavirus testing centers in Guetersloh, where the slaughterhouse is located.

Sven-Georg Adenauer, the head of the regional administration, said authorities want to be able to conduct 10,000 tests per day, free of charge.

The service is expected to be widely used as some regions of Germany have said they'll only allow people from the two districts to visit if they can provide proof of a negative test. Authorities warned those seeking a test to expect long waiting times, and urged them to bring sunscreen and water.

So far, there is little sign of widespread community transmission, officials say.

Overall, Germany has confirmed more than 193,000 cases of COVID-19 since the start of the pandemic, and 8,936 deaths, according to a tally by Johns Hopkins University.

The number of new daily cases had dropped significantly in recent weeks until the outbreak at Toennies and several smaller clusters cropped up.

German Health Minister Jens Spahn said Thursday that it was important that ``every outbreak, every chain of infection is quickly interrupted.''