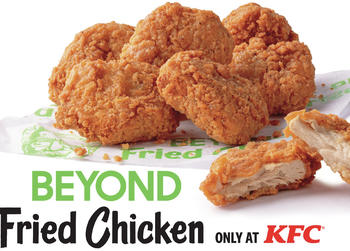 Beyond Fried Chicken is plant-based protein that boasts the flavors of KFC’s world-famous fried chicken and has a texture that looks and pulls apart like a chicken breast. KFC and Beyond Meat worked together to develop a plant-based fried chicken that would appeal to lovers of both Beyond Meat and KFC.

Beyond Fried Chicken debuted in August of 2019, making KFC the first national QSR to introduce plant-based fried chicken in the U.S. in partnership with Beyond Meat. The menu item was first available in a one-day consumer test in Atlanta and sold out in less than five hours. Following additional product development, KFC launched an expanded market test of Beyond Fried Chicken in February in the Nashville and Charlotte markets, which received an overwhelmingly positive consumer response.

“I’ve said it before: despite many imitations, the flavor of Kentucky Fried Chicken is one that has never been replicated, until Beyond Fried Chicken,” said Andrea Zahumensky, chief marketing officer, KFC U.S. “We know the east coast loved it, so we thought we’d give those on the west coast a chance to tell us what they think in an exclusive sneak peek.

Southern California is home to Beyond Meat’s headquarters, and there is a lot of excitement in the area for increased plant-based options, making it a perfect fit for an exclusive sneak peek of Beyond Fried Chicken.

“We are thrilled to continue our partnership with KFC and bring Beyond Fried Chicken to Southern California,” said Ethan Brown, Beyond Meat Founder & CEO. “KFC is a true category leader and we are proud to be their partner of choice as they make delicious plant-based chicken more accessible to consumers.”