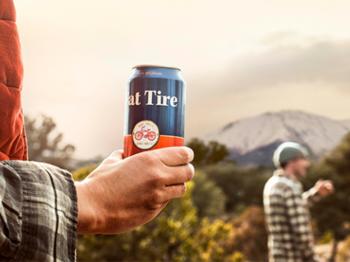 To drive action and raise awareness, a few like-minded retailers in several markets will voluntarily hike the price of Fat Tire six-packs to $100 today (International Beer Day). Fat Tire’s ten-fold price increase is designed to spark customer attention around the growing agricultural disruptions caused by climate change, which will drive the prices of staple products like barley, wheat and rice to unaffordable levels. The price change reflects the potential true cost of beer in the coming decades if climate change isn’t addressed immediately. The entire brewing industry, along with countless other industries, will suffer broken supply chains and rising costs as climate impacts escalate.

New Belgium Brewing’s CEO Steve Fechheimer is calling on Congress to address the looming climate crisis as part of their efforts to stimulate the economy in response to COVID-19. Expressing a sharply worded warning that the climate catastrophe would make the health and economic crises of 2020 feel small in comparison, Fechheimer outlined four key policy provisions that together would create a powerful, carbon-free engine of prosperity for current and future generations.

“We failed to prepare for COVID-19, but we have a historic opportunity to learn from our mistakes,” said New Belgium Brewing CEO Steve Fechheimer. "The climate crisis is an economic catastrophe far greater than the one we’re experiencing now – and strong federal investments in a zero-carbon future represents the very best way to rebuild a thriving and resilient American economy. As CEOs, we know this better than anyone, and we need the entire business community to make a forceful economic argument for climate action in Congress."

Since the inception of Fat Tire Amber Ale in 1991, New Belgium has worked to cut its environmental impact by becoming the first wind powered brewery, producing electricity onsite through solar and biogas technology, establishing the first carbon footprint study for beer and donating $17 million to climate and environmental advocacy.  To avoid living in a world where a six pack of beer costs $100, Fat Tire’s goal is to inspire other industries to act now and support the fight in ensuring a sustainable future for all.