Investment will be used for large-scale pilot line and product launch in Europe, Asia and North America 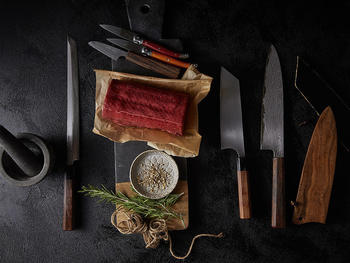 Alt-Meat innovator Redefine Meat announces today the completion of a $29 million (USD) A-series funding round led by Happiness Capital and Hanaco Ventures. They are joined by CPT Capital, a leading alternative protein investor and early supporter of Redefine Meat, as well as other notable new international investors including Losa Group, Sake Bosch, and K3 Ventures.

The investment will be used to expand the company's meat portfolio and support its commercial launch and international growth in 2021, on the back of the slated completion of a large-scale production facility for Redefine Meat's industrial 3D Alt-Meat printers set for later this year.

"We are thrilled to have concluded this round of funding with such a unique and diverse group of highly experienced, professional investors who share our vision," says Eshchar Ben-Shitrit, CEO and Co-founder of Redefine Meat. "This funding, which was concluded faster and better than we could have imagined a year ago, is a major step towards becoming the world's biggest alternative meat company by 2030."

Eric Ng, CEO of Happiness Capital, adds: "We look to find disruptive technology and ambitious leadership teams in industries that can bring real happiness to people and make the world a better place. The fast-growing alternative meat sector is one such industry, but there is currently a gap in its ability to meet the needs of people who still want to eat traditional meat. Redefine Meat offers a unique solution that appeals to meat-eaters with tasty and sustainable food. With technology that is ready for production, and strong strategic partners, Redefine Meat is poised to deliver high-quality meat alternatives that can make a meaningful impact on global meat consumption."

Pasha Romanovski, Founding Partner of Hanaco Ventures, comments: "Hanaco Ventures has been an investor in Redefine Meat since its seed round in 2019. The speed at which the company has progressed has been incredible. We have been very fortunate to work closely with Redefine Meat during 2020 and have watched the company rapidly grow from 8 people to more than 40, despite the challenges of COVID-19. Our investment in Redefine Meat gives us first-hand access to amazing state-of-the-art meat dishes that will have a profound impact on meat-eating and the environment."

Ben-Shitrit concludes: "We want to change the belief that delicious meat can only come from animals, and we have all the building blocks in place to make this a reality: high-quality meat products, strategic partnerships with stakeholders across the world, a large-scale pilot line under construction, and the first-ever industrial 3D Alt-Meat printers set to be deployed within meat distributors later this year."