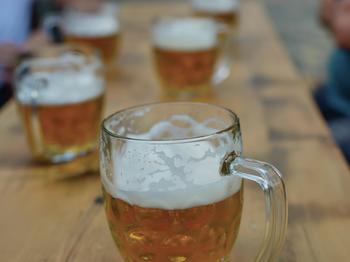 Photo by Bohdan Stocek on Unsplash

Bad news for millions of beer drinkers: Pilsner, export and wheat are likely to become more expensive soon. As many as three leading German breweries - the Radeberger Group, Krombacher and Veltins - want to noticeably increase their prices for the gastronomy and trade next spring, as they confirmed to the Deutsche Presse-Agentur on Tuesday. Earlier, the industry service "GetränkeNews" had reported on the plans.

Germany's largest brewery group Radeberger justified the move with cost increases. "In addition to massive losses in sales and earnings during the 18 months of the pandemic, all companies are now facing further quite massive cost increases for energy, logistics, empties, and raw materials and supplies," a company spokeswoman stressed. These cost increases could no longer be offset by pure efficiency improvements. Therefore, the sales prices would have to be increased.

A Veltins spokesman pointed out that costs in the energy sector alone had risen by over 150 percent in the past three years. "This can no longer be absorbed," he said.

He added that the planned price increase therefore applied to the restaurant trade as well as to the retail trade. Krombacher pointed out that the last major price adjustment was three years ago.

According to estimates by the industry service "GetränkeNews", the price increases announced in letters to customers are likely to make a glass of beer in the pub between 30 and 50 cents more expensive. The price of a crate of beer in the trade will probably rise by one euro.

For industry experts, it is foreseeable that other breweries will follow the example of Radeberger and Co. According to experience, after a price increase of the large brewers, the regional brewers of Kölsch, wheat beer and Hellem would also dare to come out of cover and follow suit on a broad front. "Beer will become more expensive across the board in the spring of 2022," the experts predicted.

In the eyes of the brewers, there are good reasons for price increases.

Since the beginning of the Corona pandemic, there has been a significant drop in prices on the market. This is because retailers would have used red pencil offers for beer to lure customers into the stores even during the pandemic. The promotional price for a crate of Premium Pils is already back at the 10-euro threshold. This means that beer costs no more than it did in D-Mark times, when the crate was on special offer for 19.99 marks.

In addition, people in Germany drank less beer during the Corona crisis than at any time since reunification. In the first half of the current year, domestic sales fell by almost 5 percent to a low of 3.3 billion liters, the Federal Statistics Office reported in the summer. The brewing industry lacked business especially in the gastronomy and at the many large events. The only bright spot was the sale of bottled beer in the retail trade, from which, however, only a few large breweries profited.

However, beer lovers still have a grace period: Radeberger does not want to start raising prices until February. Retail prices are even not to rise until May.

Krombacher and Veltins want to turn the price screw at the beginning of April. And there is still the hope that some breweries will not go along with the price increase wave after all in view of the tough competition./rea/DP/stw (dpa)