Danes have reduced meat consumption – but we lag behind other Europeans 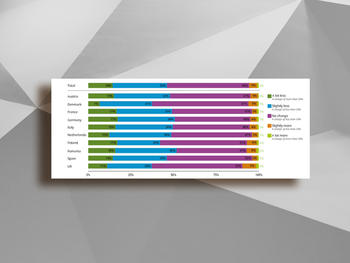 The figure shows the distribution of the answers to the question: "Compared to a year ago, how much meat (e.g. beef, pork, chicken) are you eating now?”

A major new survey on meat consumption in Europe reports that Europeans have a growing appetite for plant-based foods and that meat consumption has dipped. While this applies to Denmark as well, Danes lag behind the other countries in the survey.

To tofu or t-bone, that is the question. Europeans – Danes among them – are opting away from meat more and more. This is demonstrated in a large new University of Copenhagen led survey on meat and plant-based food consumption in ten European countries. At the same time, Denmark is one of the countries that has been slowest to cut back on steaks, sausages and the like.

Overall, nearly 46% of Europeans eat less meat than they did a year ago, while the figure for Danes is 37%. Thus, 63% of Danish consumers have not reduced their meat consumption, which positions Denmark at an equal last among the countries in this part of the survey.

"Our meat consumption can have a major impact with regards to the climate crisis we’re up against. Therefore, it is encouraging to see that a fairly large proportion of the European population is eating less meat than in the past. At the same time, it is noteworthy that Denmark, which is usually progressist and trend setter, is at the back end of the pack. I expected a bit more from Denmark," says Associate Professor Armando Perez-Cueto of the University of Copenhagen’s Department of Food Science.

Perez-Cueto led the survey which is the first of its kind in collaboration with ProVeg International and Ghent University as a part of the Smart Protein project.

Myths and cultural barriers stand in the way

Denmark doesn’t just fall in last when it comes to what we have done, but with regards to what we intend to do. Denmark is the country where the fewest number of people plan on cutting their meat consumption. While nearly 40% of Europeans combined intend on reducing their meat consumption during the months ahead, the figure for Danes is 33%. This means that 67% are either going to eat as much or more meat than before.

"Firstly, we need to puncture widespread myths. For example, half of Danes believe that we cannot do without meat nutritionally, even if scientific evidence points to the contrary. Secondly, there is a food culture which says that plant-based foods lack sufficient taste and that a complete mealtime ought to include meat. This view is held by 45% of Danes. While only 100 years have passed since Danes lived primarily on a plant-based diet, the narrative of what’s right to eat has grown strongly," says Armando Perez-Cueto.

Plenty of other barriers hinder an increasingly plant-rich diet as well. More than a third of Danes find that plant-based foods are too expensive, that they don’t know how to prepare them, that they lack information about them and that they just don’t find them visually appealing.

Armando Perez-Cueto underscores that, all in all, promising winds are blowing for a more plant-based diet among Europeans:

"Nearly 30% of the European participants report that they plan on consuming significantly more plant-based dairy and meat alternatives. And about half of all participants have yet to taste plant meat, plant milk, tofu, quinoa or similar products. So, there is enormous growth potential in the market for plant-based foods and fertile ground for developing a wider selection of and improved products."