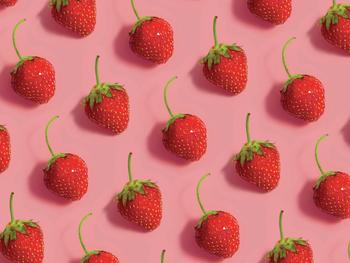 Photo by Jeremy Bezanger on Unsplash

The wild strawberry is even more highly prized than its store-bought cousin because of its intense aroma and uniquely sweet taste. However, they’re hard to find in the wild, so some companies make synthetic versions of this flavor. Now, researchers reporting in ACS’ Journal of Agricultural and Food Chemistry have come up with a naturally derived wild strawberry aroma by having an edible fungus make it from waste from black currant juice production.

Often found in forests, wild strawberries are smaller than cultivated varieties, but they’re bursting with flavor. And between their rarity and size, it’s expensive to get a natural wild strawberry flavor — the combination of their distinct aroma and taste — into foods. Interestingly, some species of fungi are adept at converting plant material into pleasant odor compounds, including vanillin, raspberry ketone and benzaldehyde, an almond-like odor. One particular edible brown-rot fungus, Wolfiporia cocos, can break down a variety of foods, even tea and carrot peels, and release fruity and floral aromas in the process. An abundant and nutrient-rich substrate for the fungus could come from the black currant juice industry, which produces a lot of pulp, seed and skins — waste known as pomace — that is usually thrown away. So, Holger Zorn and colleagues wanted to grow W. cocos on pomace from black currants and tweak the conditions to naturally produce the unique aroma associated with wild strawberries, which is highly desired by the food industry.

The researchers initially grew W. cocos with black currant pomace as the fungus’ sole source of nutrition, which resulted in fruity and floral aromas. When then the team added ammonium nitrate, sodium L-aspartate monohydrate, monopotassium phosphate and a few other substances to the medium, the culture released an aroma similar to wild strawberries. To pinpoint the exact compounds that contributed to the scent, the researchers used gas chromatography-mass spectrometry-olfactometry (GC-MS-O) and 10 trained panelists. The most intense odors that the sensory panel perceived were (R)-linalool, methyl anthranilate, geraniol and 2-aminobenzaldehyde. The researchers then combined artificial versions of these four compounds into a model wild strawberry smell and found that the sensory experts rated it as being very similar to the wild strawberry-like odor from the cultivated fungus. So, by growing W. cocos on food waste, the researchers say they’ve developed a sustainable and cost-effective way to produce an aroma that could be used industrially in a natural flavoring agent.

The authors acknowledge funding from the Hessian initiative for scientific and economical excellence (LOEWE) within the Hessian Ministry of Higher Education, Research and the Arts.

The American Chemical Society (ACS) is a nonprofit organization chartered by the U.S. Congress. ACS’ mission is to advance the broader chemistry enterprise and its practitioners for the benefit of Earth and all its people. The Society is a global leader in promoting excellence in science education and providing access to chemistry-related information and research through its multiple research solutions, peer-reviewed journals, scientific conferences, eBooks and weekly news periodical Chemical & Engineering News. ACS journals are among the most cited, most trusted and most read within the scientific literature; however, ACS itself does not conduct chemical research. As a leader in scientific information solutions, its CAS division partners with global innovators to accelerate breakthroughs by curating, connecting and analyzing the world’s scientific knowledge. ACS’ main offices are in Washington, D.C., and Columbus, Ohio.