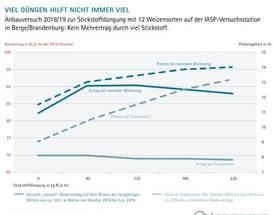 For farmers in the cultivation of arable crops and for consumers in industrialized countries, sustainable agriculture and nutrition mean that less can be more. This conclusion can be drawn on the basis of research projects carried out by the Zuse Community on the occasion of the United Nations World Food Day on 16 October, which will be held in 2019 under the motto "Healthy nutrition - for a world without hunger".

The supply of nitrogen (N) is a central factor for the yield of arable crops. However, N-fertilization does not always help much, as interim results of a research project at the Institute for Agricultural and Urban Ecological Projects at Humboldt University (IASP) show. At the IASP experimental station in Berge near Nauen, the Berlin researchers tested the varying use of N fertilisers on twelve common wheat varieties. It was found that high nitrogen yields were accompanied on average by slightly lower grain yields per hectare of the 12 varieties tested on the loamy Brandenburg sandy soil of the test site during drought. Under normal weather conditions, the yield even fell significantly from a nitrogen fertilisation of 135 kg N per year and hectare (ha). On the other hand, the plants reacted to increased N doses with higher protein contents during drought. "Even N fertilisation in the usual dosage in practice on the light soils of the experimental site apparently led to a loss of yield, while the protein content of the wheat continued to rise," explains IASP test leader Dr. Andreas Muskolus on the results of the first year of cultivation in the four-year EU joint project Circular Agronomics. It stimulates a rethink in the trade, where high protein contents above the level necessary for good baking properties continue to be rewarded with surcharges. More frugal farming methods would make it harder. Muskolus rather sees the breeding on the way to placing more value on the root development of the plants in order to help the plants in dry times.

Using field beans for high-quality food
Sensible fertilization in bread cereals is also decisive for the environment and nutrition because winter wheat, with a cultivation area of around 3 million hectares, is Germany's most important arable plant. For healthy crop rotations in which cereals alternate with other arable crops, legumes are gaining in importance. In Germany, for example, the area under field beans has tripled in the past ten years from a very low level to currently around 50,000 hectares. At present, legumes are almost completely migrating from fields in Germany to animal feed production. It doesn't have to stay that way. "We are researching how to use the protein of the field bean with its valuable properties in attractive foods for human nutrition," explains Jesus Palomino, Head of the Proteins Department at the Pilot Plant Oil Technology Research Institute in Magdeburg (PPM).

French fries barrier also for vegans
In concrete terms, the PPM researchers have already used the binder properties of the field bean protein in state-funded projects and improved them through functionalisation. In order to make grains or dried herbs stick to the top of crispbread, for example, they used the protein from the field bean as an adhesive - which made it possible, for example, to dispense with sugar. The PPM also showed how well the field bean protein binds in a dough for confectionery production in order to reduce the proportion of cereal flour in the product. "By adjusting parameters such as pH and temperature, we were able to functionalize the protein to achieve good adhesive properties," explains Palomino. In future, he and his team plan to test the qualities of the legume for another particularly popular product: mayonnaise. The field bean glue is supposed to replace the egg yolk as emulsifier in the mayonnaise. So vegans could also become mayonnaise fans.

Quality control as a field for innovation
In addition to the production of arable crops and food, quality control is a field of innovation - in the sense of healthy nutrition and consumer protection. fzmb GmbH - Forschungszentrum für Medizintechnik und Biotechnologie from Bad Langensalza has developed a measuring device that is able to determine the nutritional values of meat, sausage, cheese and many other foodstuffs within a few seconds. The device, called "mylab", weighs only 5 kg and is 30 cm high and requires no chemicals for its analyses. fzmb GmbH uses the measuring principle of near infrared spectroscopy for "mylab". The components of the sample are determined by their content of characteristic molecular groups. The oscillations of these molecular groups absorb certain parts of the infrared radiation hitting the sample. The reflected radiation then immediately allows conclusions to be drawn about the chemical composition. Using statistical methods and algorithms based on artificial intelligence, this relationship is modelled and evaluated. For exact determinations, data sets with a known content of the respective foodstuff were prepared beforehand.

The "mylab" technology could in future also be used for microbiological rapid analyses to estimate the shelf life. A first study has already shown that there is a correlation between the storage time and the spectral properties of the sample. Further tests are currently underway. Initial results suggest that it is possible to quickly determine the total bacterial count in foodstuffs using near-infrared spectroscopy.

"Researchers in the Zuse community are working on numerous projects to improve agricultural practices, innovative food production methods and their control. Such projects play a key role for a sustainable agricultural and food industry in Europe as well as on other continents," explains Dr. Ralf-Uwe Bauer, President of the Zuse Community.