Gene-edited tomatoes could be a new source of vitamin D 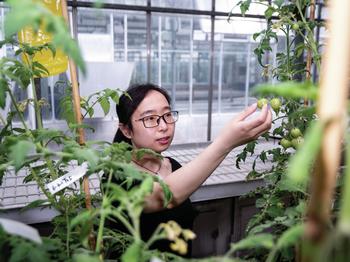 Tomatoes gene-edited to produce vitamin D, the sunshine vitamin, could be a simple and sustainable innovation to address a global health problem.

Researchers used gene editing to turn off a specific molecule in the plant’s genome which increased provitamin D3 in both the fruit and leaves of tomato plants. It was then converted to vitamin D3 through exposure to UVB light.

Vitamin D is created in our bodies after skin’s exposure to UVB light, but the major source is food. This new biofortified crop could help millions of people with vitamin D insufficiency, a growing issue linked to higher risk of cancer, dementia, and many leading causes of mortality. Studies have also shown that vitamin D insufficiency is linked to increased severity of infection by Covid-19.

Tomatoes naturally contain one of the building blocks of vitamin D3, called provitamin D3 or 7-dehydrocholesterol (7-DHC), in their leaves at very low levels. Provitamin D3, does not normally accumulate in ripe tomato fruits.

Researchers in Professor Cathie Martin’s group at the John Innes Centre used CRISPR-Cas9 gene editing to make revisions to the genetic code of tomato plants so that provitamin D3 accumulates in the tomato fruit. The leaves of the edited plants contained up to 600 ug of provitamin D3 per gram of dry weight. The recommended daily intake of vitamin d is 10 ug for adults.

When growing tomatoes leaves are usually waste material, but those of the edited plants could be used for the manufacture of vegan-friendly vitamin D3 supplements, or for food fortification.

“We’ve shown that you can biofortify tomatoes with provitamin D3 using gene editing, which means tomatoes could be developed as a plant-based, sustainable source of vitamin D3,” said Professor Cathie Martin, corresponding author of the study which appears in Nature Plants.

“Forty percent of Europeans have vitamin D insufficiency and so do one billion people world-wide. We are not only addressing a huge health problem, but are helping producers, because tomato leaves which currently go to waste, could be used to make supplements from the gene-edited lines.”

Previous research has studied the biochemical pathway of how 7-DHC is used in the fruit to make molecules and found that a particular enzyme Sl7-DR2 is responsible for converting this into other molecules.

To take advantage of this the researchers used CRISPR-Cas 9 to switch off this Sl7-DR2 enzyme in tomato so that the 7DHC accumulates in the tomato fruit.

The 7-DHC accumulates in both the flesh and peel of the tomatoes.

The researchers then tested whether the 7-DHC in the edited plants could be converted to vitamin D3 by shining UVB light on leaves and sliced fruit for 1 hour. They found that it did and was highly effective.

After treatment with UVB light to turn the 7-DHC into Vitamin D3, one tomato contained the equivalent levels of vitamin D as two medium sized eggs or 28g tuna – which are both recommended dietary sources of vitamin D.

The study says that vitamin D in ripe fruit might be increased further by extended exposure to UVB, for example during sun-drying.

Blocking the enzyme in the tomato had no effect on growth, development or yield of the tomato plants. Other closely related plants such as aubergine, potato and pepper have the same biochemical pathway so the method could be applied across these vegetable crops.

Earlier this month the UK Government announced an official review to examine whether food and drink should be fortified with vitamin D to address health inequalities.

Most foods contain little vitamin D and plants are generally very poor sources. Vitamin D3 is the most bioavailable form of vitamin D and is produced in the body when the skin is exposed to sunlight. In winter and in higher latitudes people need to get vitamin D from their diet or supplements because the sun is not strong enough for the body to produce it naturally.

First author of the study Dr Jie Li said: “The Covid-19 pandemic has helped to highlight the issue of vitamin D insufficiency and its impact on our immune function and general health. The provitamin D enriched tomatoes we have produced offer a much-needed plant-based source of the sunshine vitamin. That is great news for people adopting a plant-rich, vegetarian or vegan diet, and for the growing number of people worldwide suffering from the problem of vitamin D insufficiency.”