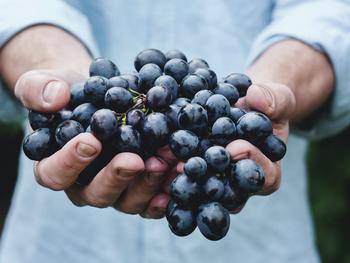 Photo by Maja Petric on Unsplash

Pomace – the mashed, leftover pulp from red grapes in the early process of making wine – is considered byproduct rubbish. But maybe not for long. In a new Cornell University-led food science study, researchers now demonstrate how viticultural trash could be a nutritive treasure.

The group showed that two stilbenes – beneficial molecular compounds found in plants – can affect human intestines and the stomach’s microbiome in a healthy way. While this still needs further research, the finding may play a role in reducing the risks from cardiovascular disease and diabetes, according to their work published in the journal Nutrients.

“This byproduct of making wine has important potential,” said Elad Tako, associate professor of food science in the College of Agriculture and Life Sciences. “If we can use the pomace to either extract key compounds or use them as a dietary ingredient to fold into food, then grape pomace can be a very sustainable source of nutritional compounds with demonstrated health benefits.”

Tako said the research provides understanding on how stilbenes work at the human gut level.

“I’ve been working with polyphenols (plant-based nutritional compounds), and I was intrigued by previous research that suggested that bioactive compounds – such as resveratrol in red wine – has cardiovascular and other health benefits,” Tako said. “The mechanism of how these compounds work in the body was not clear, so I used my in vivo model to find the answer.”

By using a chicken (Gallus gallus) as in vivo model, the scientists were able to determine the nutritional benefits of the stilbenes, resveratrol and pterostilbene.

The embryonic phase (the fertile egg) of Gallus gallus lasts for 21 days, which is when the embryo is surrounded by amniotic fluid (egg whites), naturally and orally consumed by the embryo prior to hatch on day 21.

In the experiment, the stilbenes extract was injected into the eggs’ amniotic fluid, consisting mostly of water and peptides, on day 17 of embryonic development. The amniotic fluid and the added nutritional solution were then consumed by the embryo by day 19 of incubation – a method developed by Tako called “intra amniotic administration.”

In this way, the group learned how the resveratrol and the pterostilbene affects the gastrointestinal tract, as well as other physiological systems and tissues, Tako said. The group confirmed positive, nutritional effects on the intestinal microbiome and small intestine.

This research has led to a patent, and the manuscript is part of a Nutrients special issue, “Dietary Polyphenols and Flavonoids, Mineral Bioavailability, Gut Functionality, Morphology and Microbiome.”