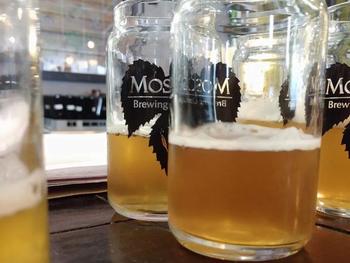 A set of experimental SMaSH beers brewed with a single malt of barley and single hops-- the hops were all the same, but each beer contained a different type of barley. 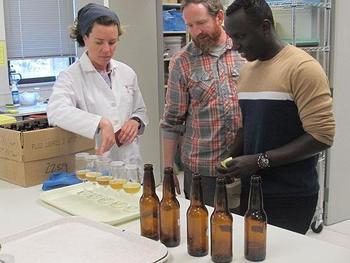 When it comes to craft beer, the flavor doesn't have to be all in the hops. As a panel of amateur beer tasters at Washington State University recently demonstrated, malted barley, the number one ingredient in beer besides water, can have a range of desirable flavors too.

Researchers recruited a panel of about 100 craft beer drinkers to taste some so-called SMaSH beers--those brewed with a single barley malt and single hop. All the beers contained the same hop variety, called Tahoma, but each had a malt from a different barley genotype, or genetic makeup. Trained tasters can distinguish these easily, but even the untrained panel could taste the difference among five different barley varieties--and definitely favored some more than others.

"We found that the untrained panelists could differentiate among the barley breeding lines in the beer," said Evan Craine, a WSU doctoral student and first author on the study in the Journal of Food Science. "They did a good job of selecting attributes that revealed distinctive profiles for each of the beers."

The panel generally preferred the four barley breeding lines developed at WSU over the control, known as Copeland, a high-quality malting barley widely grown in Washington state. The panelists were able to easily identify the flavor profiles of the beers, such as one with a "fruity and sweet aromatic" flavor and another with a "citrus" profile made with a barley called Palmer, a variety recently released by WSU for commercial use.

While the untrained panel could distinguish flavors from brewed beers, they were not as adept at tasting the differences among "hot steep" samples which are made by combining hot water and ground barley malt before filtering. This creates a sweet liquid--similar to that made by brewers before yeast is added to create alcohol.

The researchers had hoped amateur beer tasters could distinguish flavor differences in the hot steep as it would shorten the testing process for new barley varieties. Corresponding author Kevin Murphy was not ready to give up on the method.

"Hot steep malt still shows a lot of promise," said Murphy, a WSU associate professor of crop and soil sciences. "The next step would be testing it with a trained panel to see if they can distinguish barley varieties. Ideally, we would just set it out to consumers because hot steep malting is great outreach. It gets people involved. They love tasting and talking about it."

While U.S. craft beer drinkers are known for their love of hop-heavy India Pale Ales, the results of this study add evidence that barley malts might be another good way to develop new beers.

For this study, Craine and Murphy worked with Scott Fisk, a faculty research assistant at Oregon State University, to create the malts and brewer Aaron Hart of Moscow Brewing Company to develop the beers, using hops only to add a little bitterness to balance the sweetness from the malt. These types of beers are called "malt-forward." They can be light or strong flavored, ranging in types from lagers and pilsners to ambers and stouts. Hart called the beers developed for this study "American Pale Ales."

More variety from malt-forward beers can potentially benefit not only beer lovers but also the environment and brewers' bottom lines, said Craine.

"In terms of sustainability, hops can be pretty resource intensive, and at least around us in Pullman, we can grow barley that's just rain fed," he said. "Hops can also be really expensive. Brewers are already buying the malt, so if we can find ways to increase the flavor contribution from the malt, hopefully, they can rely less on the hops and save money."

While the hops craze is continuing, the malt-forward beers have the potential to spur the next evolution in craft brewing, said Murphy.

"Just as craft beer flavor has evolved in the last 20 years, we can expect it to continue to change over the next 20, and the new frontier will be adding different barley flavors or barley-hop combinations," he said. "I don't know how many people knew about IPAs 20 years ago, and they exploded. Brewers are very innovative, and I am very excited to see where this goes in the future."